The discourse of the war defeat in Armenian online media

The Armenia-Russia-Azerbaijan trilateral statement signed on November 10, 2020, gave rise to the topic of the reasons for the defeat in the social-political community. Online media played a key role in publicizing the discourse and reflecting socio-political polarization. Studying the editorial policy of Armenian online media outlets will provide an opportunity to coordinate the circulated narratives, and assess the role of the media in public discourses.

I conducted small research aimed at revealing the framing mechanisms and patterns of narratives which covered the post-war discourse. Content and frame analysis of news stories was implemented. The research problem has been identified and articulated, based on the model of three Armenian online news outlets - Tert. am, Armtimes.com, and Hetq. am. The research data is not statistically representative. The problem of the research is to find out the thematic statements in articles, the primary sources of information, and the title policy of given media outlets from November 10 to December 31, 2020. The document review method was implemented with the help of MS Excel software.

The total number of articles with thematic statements was 266: 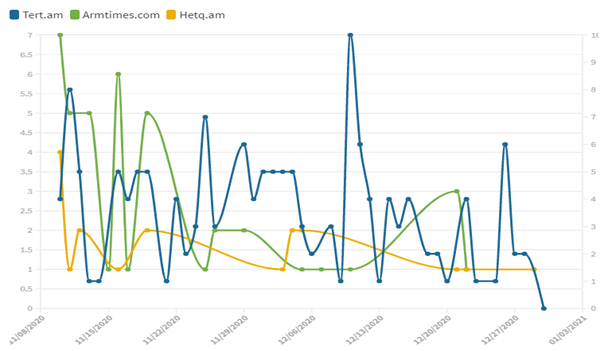 It can be seen that Tert. am has maintained an interest in the topic throughout the study period. Armtimes.com had a lot of publications in the first ten days, from December 15-20, which coincides with the escalation of internal political events. Hetq. am showed some interest in the topic only in the first stage of the study period, and in the second it forgot about it.

For the most part, the observed articles (see Graph 2) were based on the opinion or comment of a third party, or completely consisted of a direct quote of a third party.

Tert. am, in proportion, has more often copied materials from other platforms. Armtimes.com և Hetq. am made relatively few direct quotes, but in general, they are more based on the opinion of third parties.

The authorship description of the articles can be seen below.

Tert.am generally reproduced the thematic articles from another source. It also stood out with the fact that only a few articles have information about the author.

The official source is most often quoted by Armtimes.com. Social media is the source of the vast majority of Tert. am's articles. Hetq. am, compared to the other two websites, more often quoted foreign sources.

The framing of thematic articles differs significantly. Tert. am has apparently accepted the opposition's editorial policy. Armtimes.com supports the government. Hetq. am has both pro-government and opposition theses, but the former predominate.


News
14:19 The discourse of the war defeat in Armenian online media 14:31 Irates. Armenian “Ararat” defeats “Philip Morris” in court 13:21 Impunity of Maragha massacre gave way to creation of atmosphere of permissiveness – Armenia’s Deputy FM 13:20 U.S. Congressional leaders call on President Trump to properly commemorate Armenian Genocide 13:19 FM Edward Nalbandian to visit Warsaw 13:18 Artsakh Defense Army: Adversary breaks the ceasefire 50 times 16:15 Remarks of the President of Armenia, Chairman of the Republican Party of Armenia Serzh Sargsyan at the RPA Council meeting 17:59 The 11th International Festival of Puppet Theatres will launch on September 9 with the support of Coca-Cola Hellenic Armenia Company 15:15 Festive mood and Coke from Coca-Cola Hellenic Armenia 15:13 The newly appointed Ambassador of Georgia in Armenia Giorgi Saganelidze presented his credential to the President 13:45 Coca-Cola Hellenic Armenia and Art Lunch employees have cleaned up Dalar river bank 13:09 Flood-affected citizens in Artik got financial aid from ARMBUSINESSBANK 18:51 "Yell Extreme Park" the piece of craziness in Armenia 19:26 Coca-Cola Hellenic Armenia and USAID partner to address water stewardship in Ararat Valley 13:59 President Serzh Sargsyan visited today the Embassy of France in Yerevan 11:55 President Serzh Sargsyan met with the US Secretary of State John Kerry 16:56 Coca-Cola Hellenic Armenia Company distributed soft drinks to the guests of “Vardavar” festival 16:51 President Serzh Sargsyan received members of the Council of the Ministers of Foreign Affairs of the Collective Security Treaty Organization 11:44 Congratulatory message by president Serzh Sargsyan on the occasion of Constitution day 23:09 French parliament unanimously adopted bill to criminalise the denial of Armenian Genocide 16:46 5 lucky winners of Coca-Cola EURO 2016 promo are off to France to watch Germany vs Italy quarter final 16:43 President Serzh Sargsyan received tonight the OSCE Chairman-in-Office, Minister of Foreign Affairs of Germany Frank-Walter Steinmeier 19:29 High-level Armenian-Czech negotiations took place at the Presidential Palace 15:12 Coca-Cola Hellenic Armenia Company celebrates International Children’s day 19:36 President Serzh Sargsyan participated at the session of the Supreme Council of the Eurasian Economic Union 17:40 Buy a “Coca-Cola” soft drink; win a ticket for UEFA Euro 2016 19:57 Coca-Cola Hellenic Bottling Company Armenia celebrates the 20th Anniversary 12:24 Mardakert overcomes a bad dream 22:01 "The Lavrov document" does not exist, and peacekeepers will be deployed only in the final stage of the conflict resolution: Igor Popov 21:55 The RA President has discussed with the co-chairs the situation on the contact line after the Azerbaijani aggression 21:49 James Warlick on human rights violations: We have seen the photos, we are deeply troubled 21:46 President Serzh Sargsyan met with first President Levon Ter-Petrosyan to discuss Four Day War 21:45 About 60 organisations call on US president to investigate into allegations of Azerbaijan’s collaboration with ISIS 12:42 The #KarabakhNow | Against International Inactivity protest will take place at Republic Square 14:10 International press compares the actions of Azerbaijan forces in Artsakh to the atrocities done by ISIS 13:34 Parties to Karabakh conflict agree to cease fire for 5 hours 12:42 Sargsyan to Medvedev: They diminished authority of EAEU 12:36 The rival continues provocations 12:32 Azerbaijan shells settlements of Armenia’s Tavush and Gegharkunik provinces 12:28 NKR Defense Army destroyed an adversary drone

11:12 Who will represent Armenia in the ECHR?

11:40 Russia will recognize Karabakh's independence, if....